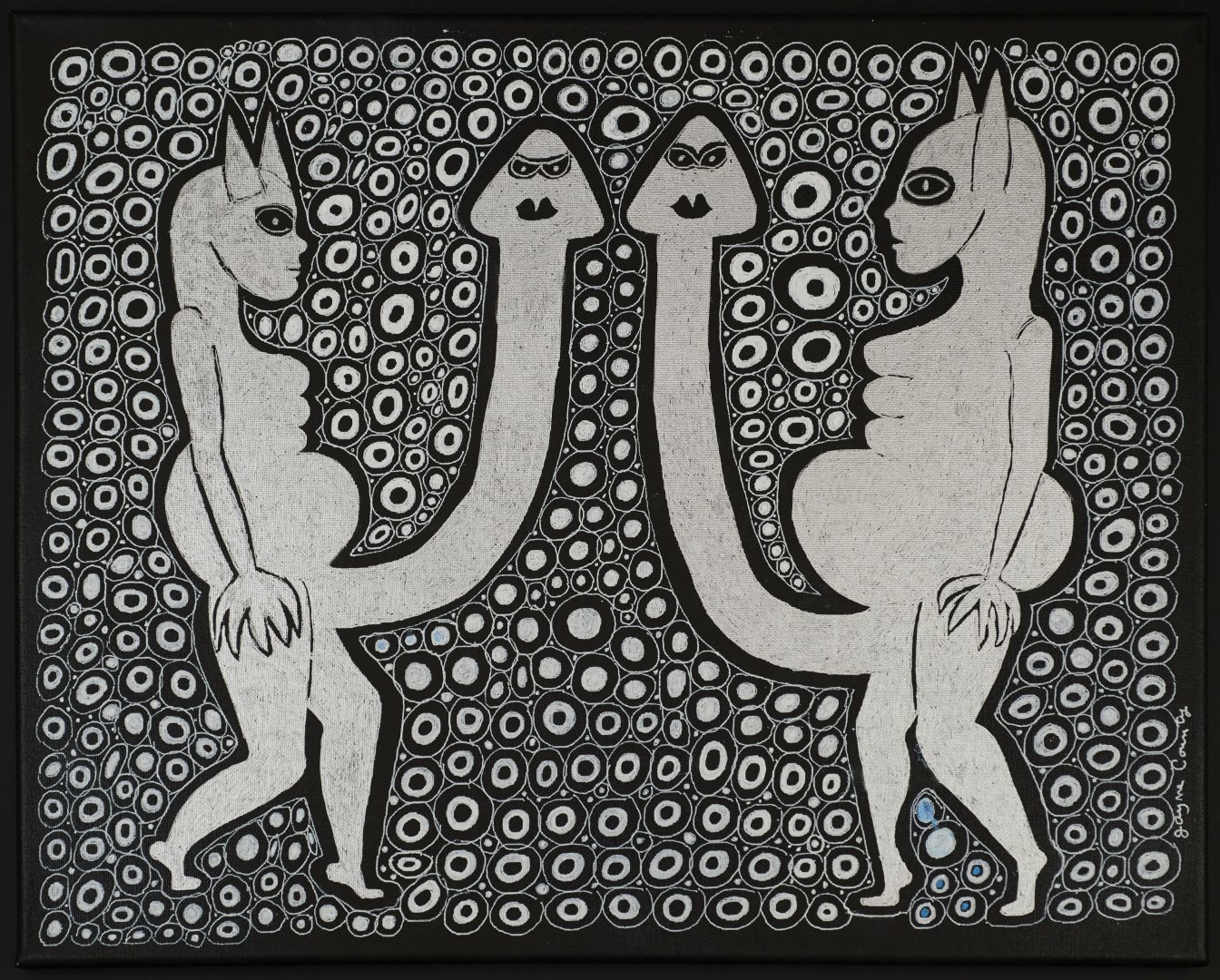 Jayne County, perhaps most well-known as a rock singer and performer, began her artistic career in experimental theater. County, a self-developed artist, often utilizes the artistic process as an emotional release. Her works on paper and canvas vary in degrees of transparency and complexity as well as afford glimpses into her fantasies populated by creatures from other worlds and times.

“Bastet is an important figure to me both historically and spiritually,” states Jayne. “The Cat Goddess of Ancient Egypt has always been fascinating to me, ever since I was a small child. I am a cat freak and have had many cats throughout my life. Bastet is the epitome of cat worship and concentration. She protects me and my cats from harm and hostility from ignorant humans, so it is my privilege to present Bastet. She comes in dreams and has sexual inclinations, as she once did in Ancient Egypt, thus, the Goddess of Wet Dreams. The Ancient Greeks referred to incubus and succubus, creatures that visited mortals in their dreams in order to have sex with them. I have depicted her as a fertility goddess with multiple breasts and huge snake-like penises, a representation of the fertility of both sexes, male and female, as one. Bastet, the Goddess of Wet Dreams!”

Jayne County (also known as Wayne County and V. W. Rogers) was born in 1946 in Dallas, Georgia. She moved to New York in 1968 and was a regular at the Stonewall Inn and an active participant in the Stonewall Riots. In 1969, she began her career working with playwright Jackie Curtis and also with John Vaccaro and Tony Ingrassia of Theater of the Ridiculous. Andy Warhol cast County in his theatrical production of Pork, and, after the New York run, the play moved to London. While there, County met David Bowie and he signed her to his MainMan record label. County is best known as the vocalist in her bands Queen Elizabeth (1972), Wayne County and the Backstreet Boys (1974), and Wayne County and the Electric Chairs (1977). She was also the house DJ at Max’s Kansas City. In 1978, County appeared in Derek Jarman’s film Jubilee, in which she performed her song, Paranoia Paradise. County has released many records on several record labels. Her autobiography, Man Enough to be a Woman, was released in 1995, and in 1997, she was immortalized in Please Kill Me: The Uncensored History of Punk, Chapter 29: Fun with Dick and Jayne. In 2018, County presented the first retrospective exhibition of her visual artwork at PARTICIPANT INC in New York, curated by Michael Fox. County’s career spans five decades, and she has lived and worked in New York, London, Berlin, and currently lives in Georgia. County’s work has always protested the societal norms by which she has never been constrained.