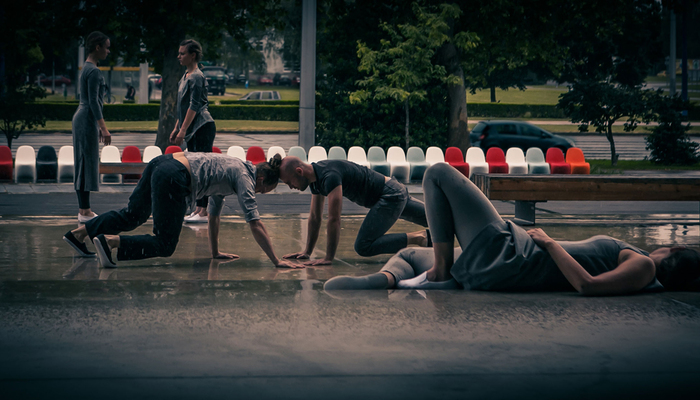 Dress Rehearsal is Free and Open to the Public
AAM Event Performance: Tuesday, April 28, 8PM (open to AAM registrants only, see details below)

The Contemporary presents the U.S. Premiere of acclaimed choreographer Jonah Bokaer’s Other Myths at Atlanta Contemporary Art Center on Tuesday, April 28, 2015 at 8pm EST. This work—staged specifically for The Contemporary’s unique outdoor architecture—will be performed at an AAM conference party from 7-10pm titled “”The Contemporary and the Westside”:www.aam-us.org/events/annual-meeting/program/sessions-and-events?ID=2935” hosted in conjunction with the American Alliance of Museum’s 2015 conference in Atlanta, GA. Bokaer’s choreography will be unveiled site-specifically for the outdoor Pavilion, performed from 8:00pm-8:40pm by five internationally-acclaimed dancers including Szabi Pataki, Zoltán Grecsó, Katharina Illnar, Karolina Šuša, Evin Hadžialjević: all are appearing in the United States for the first time.

Other Myths premiered in June 2014 in Hungary, originally commissioned for the Ludwig Múzeum of Budapest. A country not known for its racial, religious or ethnic tolerance, Bokaer selected five dancers from Eastern European countries to challenge governmental prejudice. Each of the performers provided Bokaer with a chosen Carpathian myth from their country, which he had interpreted and structured choreographically, weaving them into a single work designed for the Ludwig Múzeum. The music is by Soundwalk Collective, with field recordings from the Black Sea. There is no décor: Other Myths instead is renowned for its uncanny ability to overtake museum spaces of many scales, using the museum’s architecture as a canvas for a contemporary choreography.

A dress rehearsal, free and open to the public, for Other Myths will occur on Monday, April 27 at 8:00pm. (Not open to press.)
Location: Outdoor Pavilion, Atlanta Contemporary Art Center.

Regarding the AAM Event: AAM members are invited to preview Endless Road: A Look at Nexus Press, an exhibition showcasing artists books published by Nexus Press from 1976–2003; enjoy food provided by Westside purveyors and local brews from Second Self; tour onsite artists’ studios from the Studio Artist Program; and take in the U.S. premiere of Other Myths by Jonah Bokaer. Tickets to attend the AAM party at Atlanta Contemporary Art Center are available only for conference registrants and AAM members. Details HERE. For inquiries specific to the event and AAM conference, email Romy Maloon, [email protected] or 404.688.1970 × 212

Bokaer was the first dance artist to be inducted a Young Leader of the French American Foundation (2008–2009) and was among the very few dance artists to ever be recognized with the prestigious Crain’s NY Business “40 Under 40” (2011). Between 2013-2015, Bokaer is among 10 United States artists to receive a Doris Duke Charitable Foundation “Building Audience Demand” Grant Award, in partnership with the Georgia Institute of Technology.