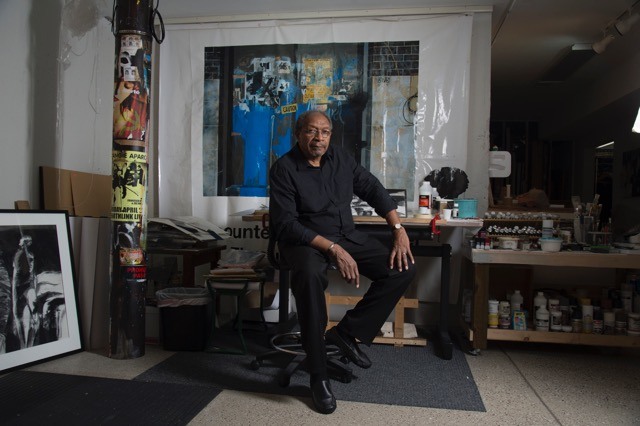 The Nexus Award is a public acknowledgment of individuals, groups, or organizations that have made significant contributions to the contemporary arts landscape and celebrates local leaders who are instrumental in making Atlanta an exceptionally vibrant arts community. Professor Emeritus and Former Director of Art and Design at Georgia State University, Walker began his long career as an educator at the University of the Pacific in Stockton, California where he was a professor and later chair of the Department of Art. In 1983 he accepted a position in Atlanta as a professor and director of the art program at Georgia State University. He retired from the University in 2000. Walker's career as an artist spans over 50 years - a highlight to date is the solo exhibition currently on view at Sikkema Jenkins & Co (New York) curated by his daughter and gallery artist, Kara Walker.

“By uniting the Nexus Award under the umbrella of ART PARTY, we aspire to introduce our increasing and diversified audiences to individuals like Mr. Walker who have and will continue to shape the landscape of contemporary art here in Atlanta,” says Executive Director, Veronica Kessenich. “Larry Walker’s impact on the lives and careers of artists is significant. It is a privilege to honor him as the 2016 Nexus Award recipient.”

Walker has an extensive exhibition history. He has been the subject of over 40 solo exhibitions and has participated in over 200 group exhibitions since 1971. His work is in the collection of the High Museum in Atlanta, Los Angeles County Museum of Art, Philadelphia Museum of Art, The Museum of Contemporary Art of Georgia and The Studio Museum in Harlem, among others.

Daniel Fuller, Curator at Atlanta Contemporary says, “be it as an artist, an arts advocate, or at Georgia State University where he served as the School of Art and Design’s director for 11 years, there are very, very few people that have meant more to the Atlanta art scene than Larry. Over 50 years he has documented the contemporary social landscape. He is an Atlanta treasure.”

The public reception for the 2016 Nexus Award will be held on Saturday, August 27 in conjunction with ART PARTY. A private reception for supporters including sponsors, host committee, and individuals will be held at a soon to be determined date and time.

To date, the Nexus Award has recognized seven outstanding individuals:

Atlanta Contemporary engages the public through the creation, presentation and advancement of contemporary art. Founded in 1973 as Nexus, a grassroots artists’ cooperative, Atlanta Contemporary has since become one of the southeast’s leading contemporary art centers. We play a vital role in Atlanta’s cultural landscape by presenting six–10 exhibitions within four seasonal cycles each year, featuring consequential artists from the local, national, and international art scenes. We are one of the few local institutions that commissions new works by artists, paying particular attention to artists of note who have not had a significant exhibition in the Southeast. We organize 50+ diverse educational offerings annually, unrivaled by other local organizations of our size. We are the only local organization to provide on-site subsidized studio space to working artists through our Studio Artist Program, removing cost as a barrier to the creative process. Visit atlantacontemporary.org to learn more.