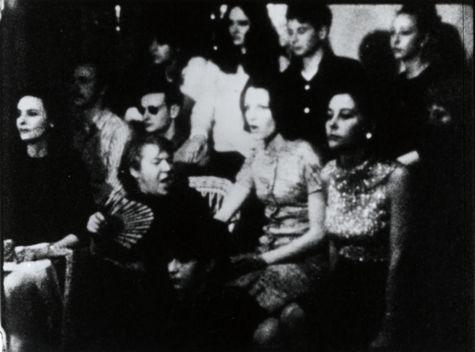 The Film Love series, curated by Andy Ditzler, provides access to great but rarely-screened films. Through public screenings and events, Film Love preserves the communal viewing experience, provides space for the discussion of film as art, and explores diverse forms of moving image projection and viewing.

Fifty years ago, director Andy Warhol and writer Ronald Tavel embarked on a collaboration that resulted in some of the most striking films of the 1960s. Their little-seen political satire The Life of Juanita Castro converts the Cuban revolution into an outrageous, gender-bent exercise in camp and petty family squabbles. As often in Warhol’s films, the real-time filming of the performance creates visible onscreen tensions between the actors, subverting theater and film conventions as much as politics.

A deliberate “ethnofiction,” Jaguar is one of cinema’s funniest and most subversive ethnographic films. In the 1950s anthropologist Jean Rouch and his Nigerian friends made a car trip from the countryside of Niger to the Gold Coast (now Ghana) and back, filming along the way. Years later, they returned to the footage and added their own often hilarious spoken commentary over the top. Filmed against the backdrop of the independence movement in Ghana, Jaguar uniquely combines politics, fiction, comedy, and anthropology during a decisive political moment.

Film Love presents a selection of short films and videos which use the form of collage to make powerful political statements. Final program selections to be announced.

Atlanta Contemporary Art Center is a non-profit, non-collecting institution dedicated to the creation, presentation, and advancement of contemporary art by emerging and established artists. Atlanta Contemporary creates a diverse cultural landscape for artists, arts professionals, and the art-interested public through its exhibitions, educational programming, and studio artist program. Visit atlantacontemporary.org to learn more.