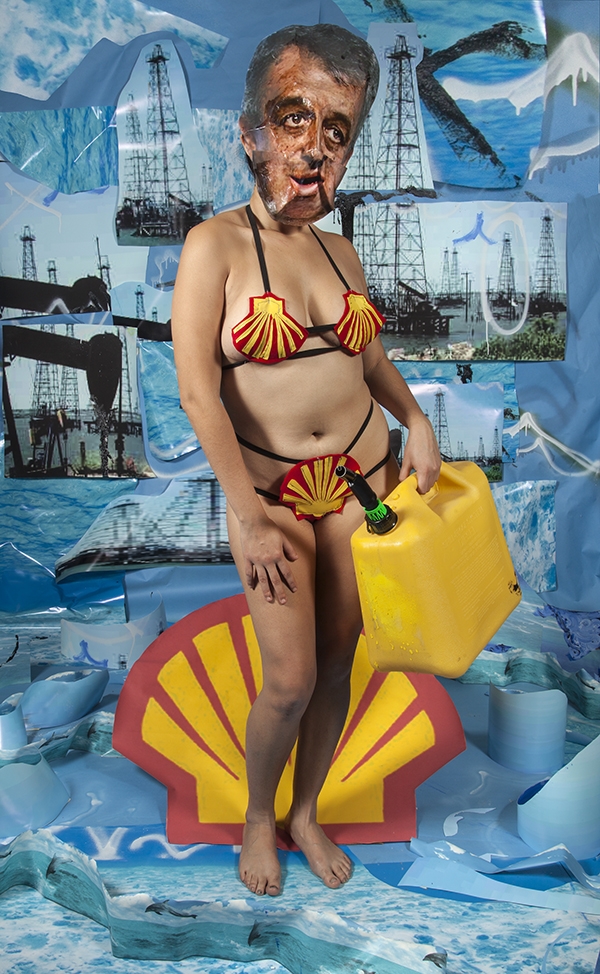 With her exhibition Medium of Exchange, Sheida Soleimani examines how oil is interchangeable with currency and the corruption at the center of the petroleum industry. The film is a piece of absurdist theatre that utilizes mayhem and anxiety over wholly serious facts ripped from public speeches. On meticulously hand-crafted sets, Soleimani weaves real news and transcripts into a scripted sadomasochistic carnival where the rich get richer, as powerful figures dominate formidable colleagues. Between these powerful men gender and sexuality is both embellished and rendered fluid as a soap opera of love and sexual desires are at odds with backdrops of oil fields and refineries that dot the landscape of the resource-rich region. Actresses and actors wearing masks of each leader perform stereotypes of masculinity and femininity, but in the end each of their fetishes return to money.

One commonality when you line-up these international titans of industry is that they are all men.

As an elite few receive untold millions, many civilians in OPEC countries struggle for civil liberties and human rights. Many oil rich countries have not used the proceeds from petroleum to diversify and strength their economies. Higher education, infrastructure, and culture are woefully underdeveloped, their citizens remain invisible, while areas around the petro companies flourish. The only way for citizens to break out, to work towards a transcendental moment, is to arm themselves with education. Sourcing from archives, media photographs, official documents, and conflicting news stories, Soleimani complies true news that can navigate language barriers and encourage citizens to demand what is rightfully theirs.

Sheida Soleimani is an Iranian-American artist, currently residing in Providence, Rhode Island. The daughter of political refugees that were persecuted by the Iranian government in the early 1980’s, Soleimani inserts her own critical perspectives on historical and contemporary socio-political occurrences in Iran. Her works meld sculpture, video, collage, and photography to create collisions in reference to Iranian politics throughout the past century. By focusing on media trends and the dissemination of societal occurrences through the news, source images from popular press and social media leaks are adapted to exist within alternate scenarios. Soleimani received her MFA from Cranbrook Academy of Art in 2015. She currently resides in Providence, RI where she teaches at the Rhode Island School of Design. She has had solo exhibitions at Edel Assanti, London, UK; BOYFRIENDS, Chicago, IL; Williamson/Knight, Portland, OR, and forthcoming shows at the CUE Arts Foundation, New York and Contemporary Arts Center, Cincinnati.

ABOUT ATLANTA CONTEMPORARY Atlanta Contemporary Art Center is a non-profit, non-collecting institution dedicated to the creation, presentation, and advancement of contemporary art by emerging and established artists. Atlanta Contemporary creates a diverse cultural landscape for artists, arts professionals, and the art-interested public through its exhibitions, educational programming, and studio artist program.

*The opening reception will be held in conjunction with Contemporary Cocktails, admission is free – cash/credit bar.