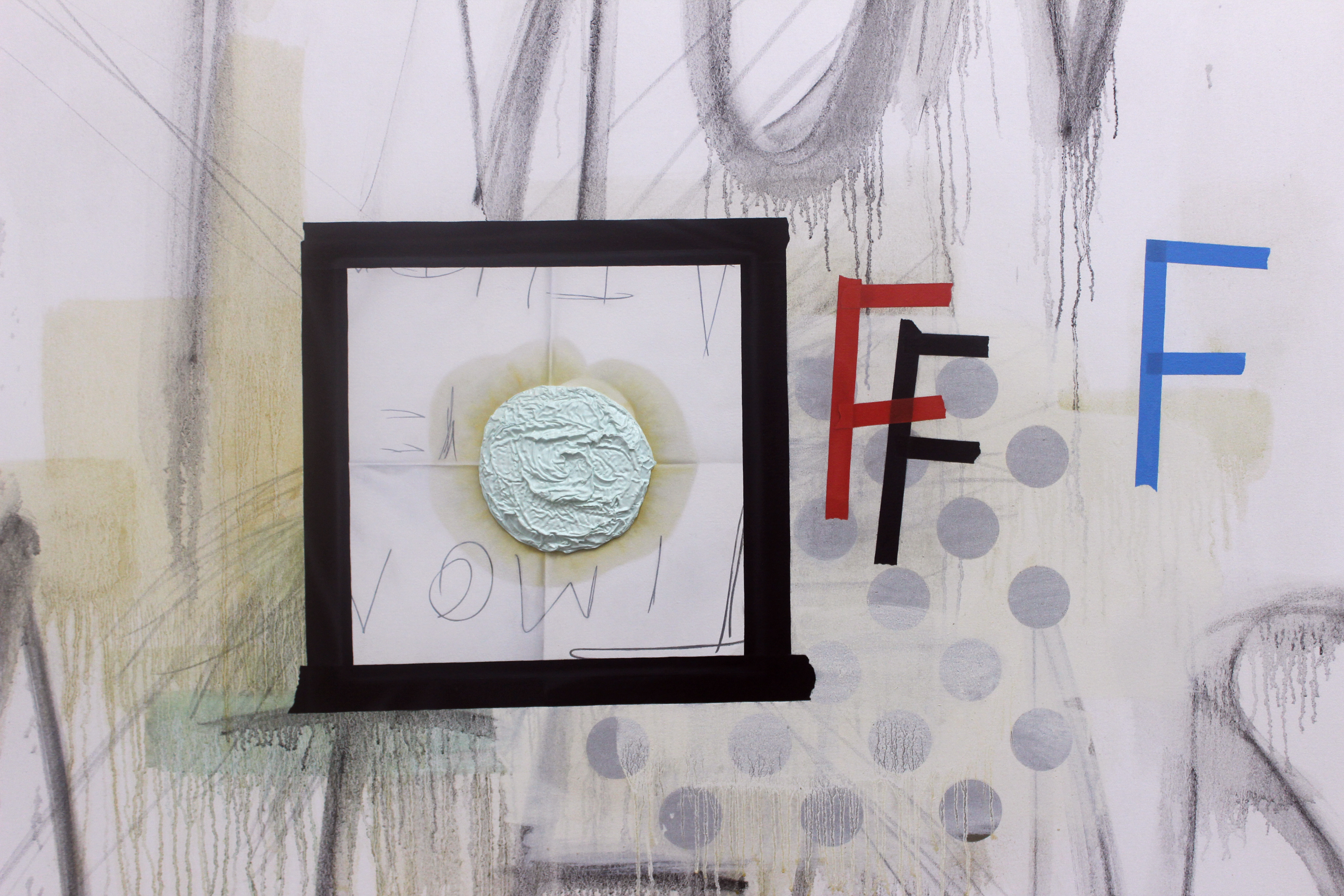 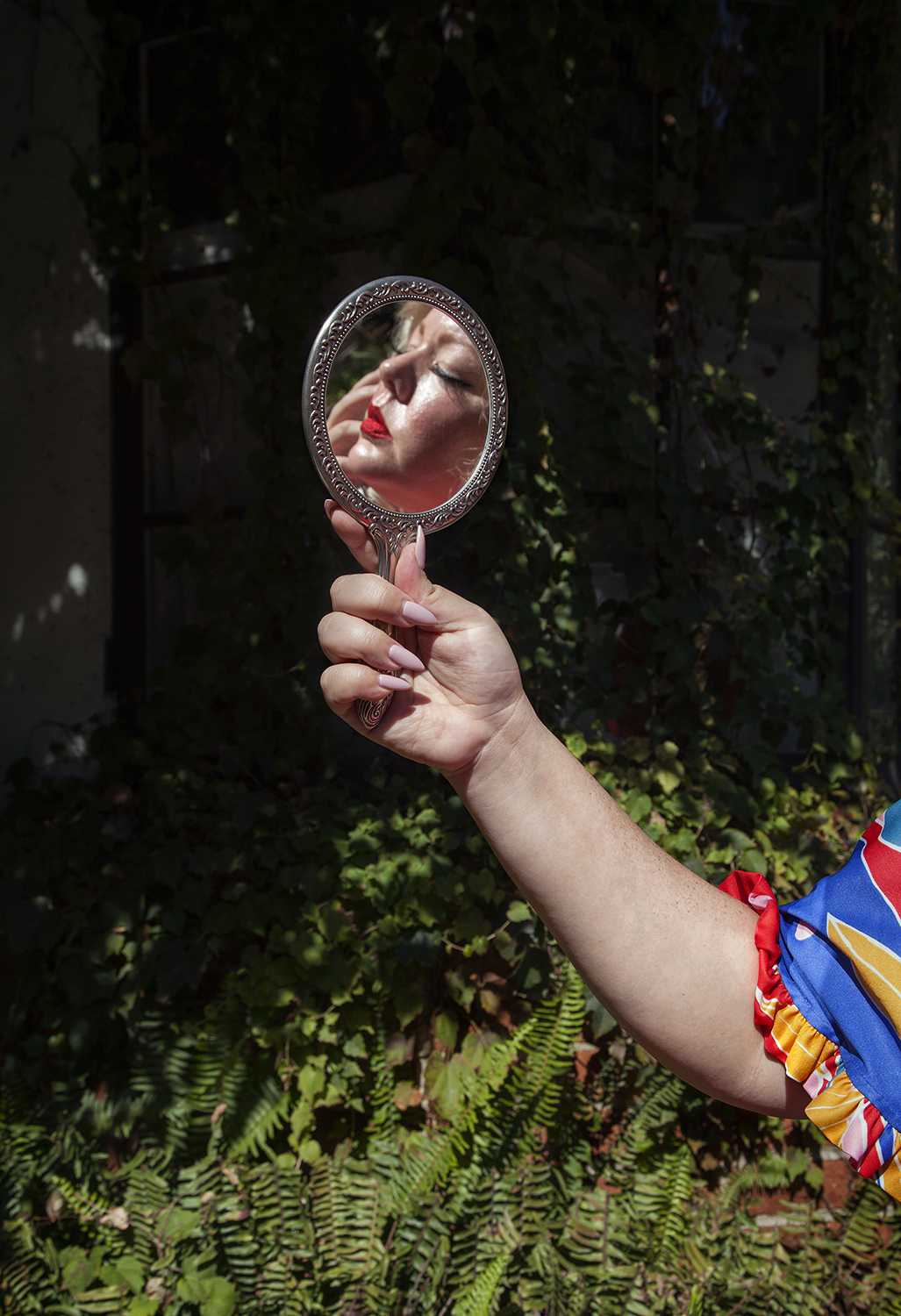 Genevieve Gaignard, I Wear A Thousand Faces, All To Hide My Own, 2018, chromogenic print, 26 x 18 inches. Image courtesy of the artist and Vielmetter Los Angeles.

Genevieve Gaignard
This Is America: The Unsettling Contradictions in American Identity
Curated by Karen Comer Lowe

Atlanta Contemporary affirms our mission and vision by inviting renowned local, national, and regional curators to present exhibitions that champion artists, center equity, and expand the practice of contemporary art.

Genevieve Gaignard
This Is America: The Unsettling Contradictions in American Identity
Curated by Karen Comer Lowe

The COVID-19 pandemic and Black Lives Matter movement, along with the insurrection of the Capital on January 6, 2021, have affected the way Americans relate to and communicate with one another.

Gaignard picks up the deep theme of identity again in her photographs which invite the viewer to look beyond the surface and consider who the subject might really be. She strives to imbue these photographs with greater significance, inserting subtle references to the media and politics, often with a sarcastic edge.

Genevieve Gaignard is a Los Angeles-based, multidisciplinary artist whose body of work incorporates installation, sculpture, collage, and photographic self-portraiture to explore race, femininity, and class. As a biracial woman in America, Gaignard investigates the aesthetic and cultural divide between Black and White, a chasm as palpable as it is “invisible". She interrogates notions of “passing” by positioning her own female body as the chief site of exploration - challenging viewers to navigate the powers and anxieties of intersectional identity.

Gaignard's work has been included in numerous solo and group exhibitions including: The Smithsonian National Portrait Gallery, D.C.; Crystal Bridges Museum of Art, AR; The Studio Museum in Harlem, NY; California African American Museum, CA; Massachusetts Museum of Contemporary Art, MA; and Prospect.4, LA. Gaignard received her BFA in Photography from Massachusetts College of Art and Design, and her MFA in Photography from Yale University.

Karen Comer Lowe is Executive Director and Chief Curator of Hammonds House Museum in Atlanta. Previously she worked as Manager and Curator of the Chastain Arts Center for 12 years. She has a passion for the arts and has experience in museums, galleries, and arts institutions for over twenty years which includes positions at the Smithsonian Institution's National Portrait Gallery, the Tubman African American Museum, and the Whitney Museum of American Art. She has also worked as an independent art advisor, appraiser, lecturer, and curator working with acclaimed artists such as Amy Sherald, Rashid Johnson, Carrie Mae Weems, and Elizabeth Catlett among many others.

Most recently and during the pandemic, Lowe worked with internationally known artist Hank Willis Thomas in placing the sculpture All Power to All People in Atlanta as a stop on its tour across the US. Lowe also developed Creative Conversations, a conversation series hosted on Instagram with artists and professional arts workers working within the African Diaspora. Conversations include Hank Willis Thomas, Sanford Biggers, Sheila Pree Bright, Halima Taha and others.

First Acts, a solo exhibition of Craig Drennen’s work, marks the artist’s return to Atlanta Contemporary. In 2010, Drennen began a three-year residency that coincided with the start of his now signature body of work based on Timon of Athens. Developing distinct bodies of work out of each character, Drennen has spent the past decade mining this long-form studio practice based on William Shakespeare’s most problematic play.

First Acts unites the early works first conceived at Atlanta Contemporary with new works that demonstrate the artist’s fastidious focus and long-term devotion to developing this unique form. Drennen’s Timon of Athens project includes painting, sculpture, installation, performance, and video, prompted by what it means to create art in the context of, and based on, the worst work by the (arguably) best and most influential Western playwright. The early characters allowed Drennen a platform to question the inherited canon while expanding his vocabulary within contemporary art. The exhibition features new combinations of characters exhibited together for the first time, demonstrating Drennen’s simultaneously historic and yet utterly contemporary take on the act of art-making.

The opening reception will include a performance and an exhibition catalog will be produced in conjunction with the exhibition.

Craig Drennen is a painter and a 2018 Guggenheim Fellow. He was a participant in Atlanta Contemporary’s studio program from 2010 through 2013 and was included in Painters Panting at Atlanta Contemporary in 2012. His MOCA GA Working Artist Project exhibition took place in 2017. His recent solo exhibitions include Old Athenian & at Stove Works in Chattanooga, TN, and Merchants, Bandits, and Certain Senators at Laney Contemporary in Savannah, GA. He has been an artist-in-residence at Yaddo, MacDowell, the Triangle Arts Fountation, and Skowhegan. His work has been reviewed in Art in America, Artforum, the New York Times, and the Boston Globe. Drennen served as Dean at Skowhegan, teaches at Georgia State University, and manages THE END Project Space in Atlanta. Since 2008, he has organized his studio practice around Shakespeare’s Timon of Athens.

Brigitte Mulholland is a Director at Anton Kern Gallery, as well as an independent curator with projects staged at Spring/Break, Cuchifritos Gallery, and the W Hotel Downtown, among others. Her shows have received reviews from Artsy, Artnet, Artforum, Hyperallergic, and Artcritical. Mulholland has been working in New York in the art world since 2006, and holds a Master’s degree in Art History from Hunter College. This is her first curatorial project in Atlanta.

Atlanta Contemporary engages the public through the creation, presentation and advancement of contemporary art. Founded in 1973 as Nexus, a grassroots artists’ cooperative, Atlanta Contemporary has since become one of the Southeast’s leading contemporary art centers. We play a vital role in Atlanta’s cultural landscape by presenting over 45 exhibitions throughout the year, featuring consequential artists from the local, national, and international art scenes. We are one of the few local institutions that commissions new works by artists, paying particular attention to artists of note who have not had a significant exhibition in the Southeast. We organize 90+ diverse educational offerings annually, unrivaled by other local organizations of our size. We are the only local organization to provide on-site subsidized studio space to working artists through our Studio Artist Program, removing cost as a barrier to the creative process. Visit atlantacontemporary.org to learn more.

*Details TBD based on COVID-19

Register to visit the galleries