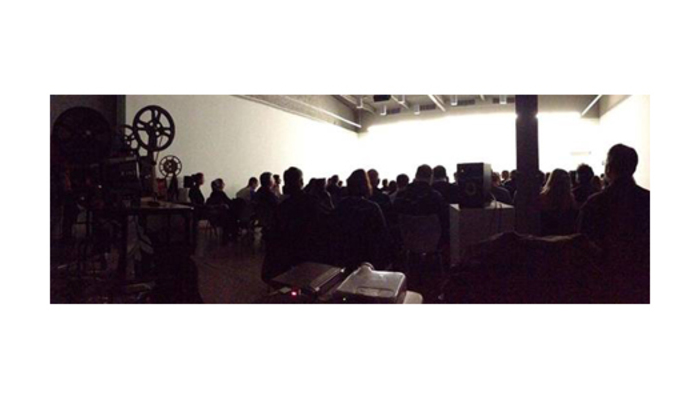 For over twelve years, Andy Ditzler has regularly presented Film Love, an ongoing curatorial project dedicated to cinematic works from all eras of motion picture history – particularly those works which are rarely seen and are not easily available on video. This unique event combines a screening of films with a close look at the Film Love series and its history, as well as the process of curating cinema.

What is particular to the curation of cinema? What issues are involved in choosing films and programs? How does one become a curator? How does the history of cinema change when we see it through film curation – and how do film screenings change curation? In the event’s first half, Ditzler will give a short presentation about film curating, drawing on his own practice in Film Love and on his recently completed doctoral research in film curation at Emory University. Somewhere between lecture and performance, this experimental presentation is accompanied by Andy Warhol’s silent 1964 film of a notorious performance by actor and comedian Taylor Mead.

The program’s second part is a selection of specially chosen short films. These include the dazzling 8mm psychedelia of Peter Rose; Jennifer Reeves’ and Jeanne Liotta’s contemporary meditations on the beauty of the filmstrip; Ben Russell’s distinctive mixture of trippy avant-garde and ethnographic documentary; a precious 1980s home movie document of two men with AIDS and their experimental drug treatment; Timothy Asch’s anthropological portrait of everyday domestic life among Venezuelan Yanomamo; and Joseph Cornell’s luminous vision of a park fountain on a mid-century November day in New York. Individually, these selections exemplify the kinds of films that must survive outside mainstream venues, thus necessitating curatorial practice. Seen together, they will demonstrate principles of juxtaposition and combination that traditionally characterize curated screenings – as well as the potential intellectual and emotional experiences available through the dedicated curation of cinema.

A Man and His Wife Weave a Hammock (Timothy Asch and Napoleon Chagnon, 1975, 9 min)