The Most Human Desire 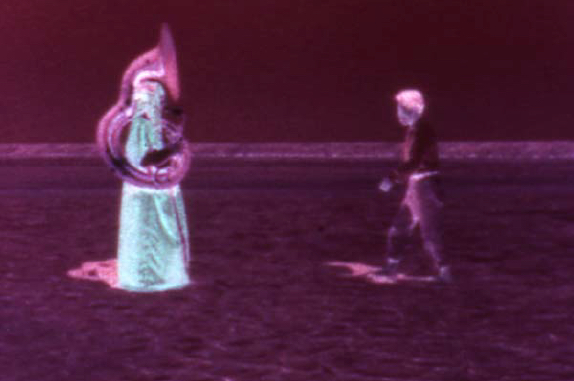 The Most Human Desire: Films by Chick Strand is a Film Love event. The Film Love series provides access to great but rarely seen films, especially important works unavailable on consumer video. Programs are curated and introduced by Andy Ditzler, and feature lively discussion. Through public screenings and events, Film Love preserves the communal viewing experience, provides space for the discussion of film as art, and explores alternative forms of moving image projection and viewing.

Mysterious and compelling, the films of Chick Strand at once occupy a unique niche and seem central to cinema. Strand’s intuitive approach to making films (“I do as I feel it,” she once said), her films’ extravagant visuality, and their unapologetic combination of ethnographic and experimental methods set her work apart from and often in opposition to feminist film, academic anthropology, and at times even the avant&dash;garde. Yet her films use basic tools of cinema – storytelling, camera movement, the relation of sound and image, and cultural memory – to exert an undeniable pull on viewers, equivalent to the most absorbing narrative movies. Film Love will present six of Chick Strand’s films in their original format of 16mm. Only one has ever been released on video in the U.S.

Strand originally studied anthropology but became interested in film, and much of her work merges the two in new ways. Filming in Mexico and in her native California, she worked equally effectively in at least three different modes: cinematographic abstraction, ethnographic&dash;style studies of people, and found footage films – and she did not hesitate to combine these modes into a single film when necessary. The resulting sense of possibility (and tension) in these works is best stated by Strand herself, in her description of her film Artificial Paradise: “the anthropologist’s most human desire.”

Strand’s acknowledged masterpiece of found footage, Loose Ends, combines images and sounds from far&dash;flung sources – old educational films, images of poverty and atrocity, and even the French New Wave – into a cohesive whole that is much more than the sum of its disparate parts. The wickedly funny Fake Fruit Factory tells the story of a workplace in Mexico and its American male boss, through the gossip of the Mexican women who work there. Cartoon Le Mousse combines Strand’s genius for the poetry of found footage with her own enigmatic imagery. Two shorter films, Anselmo and Kristallnacht, show how Strand used camera, editing and printing to create spectacular visual portraits of people and friendships.

Whether Surrealism, magic realism, or simply magic, Strand’s films are powerful and uncompromising, and they help us reconfigure our way of seeing the world into something compassionate and sensual without surrendering the critical – cinema’s “most human desire.”

A special thanks to Andy Ditzler, curator of Film Love. He can be reached at info @ frequentsmallmeals.com or online at www.filmlove.org.