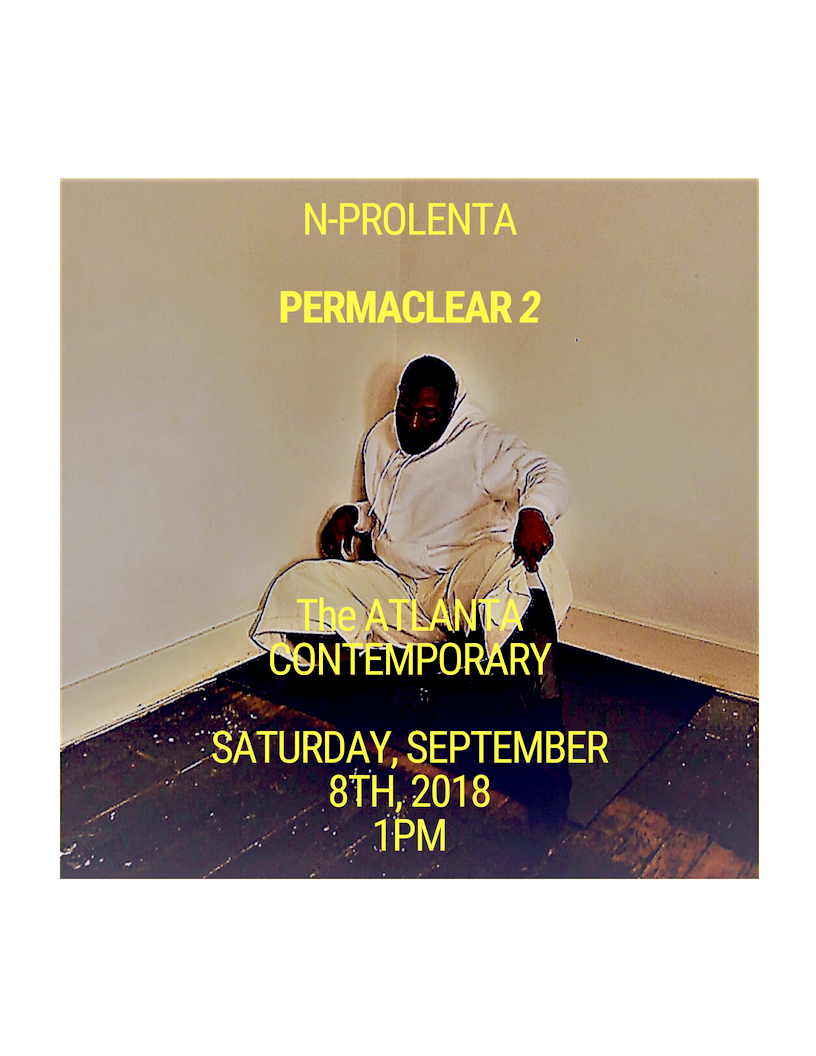 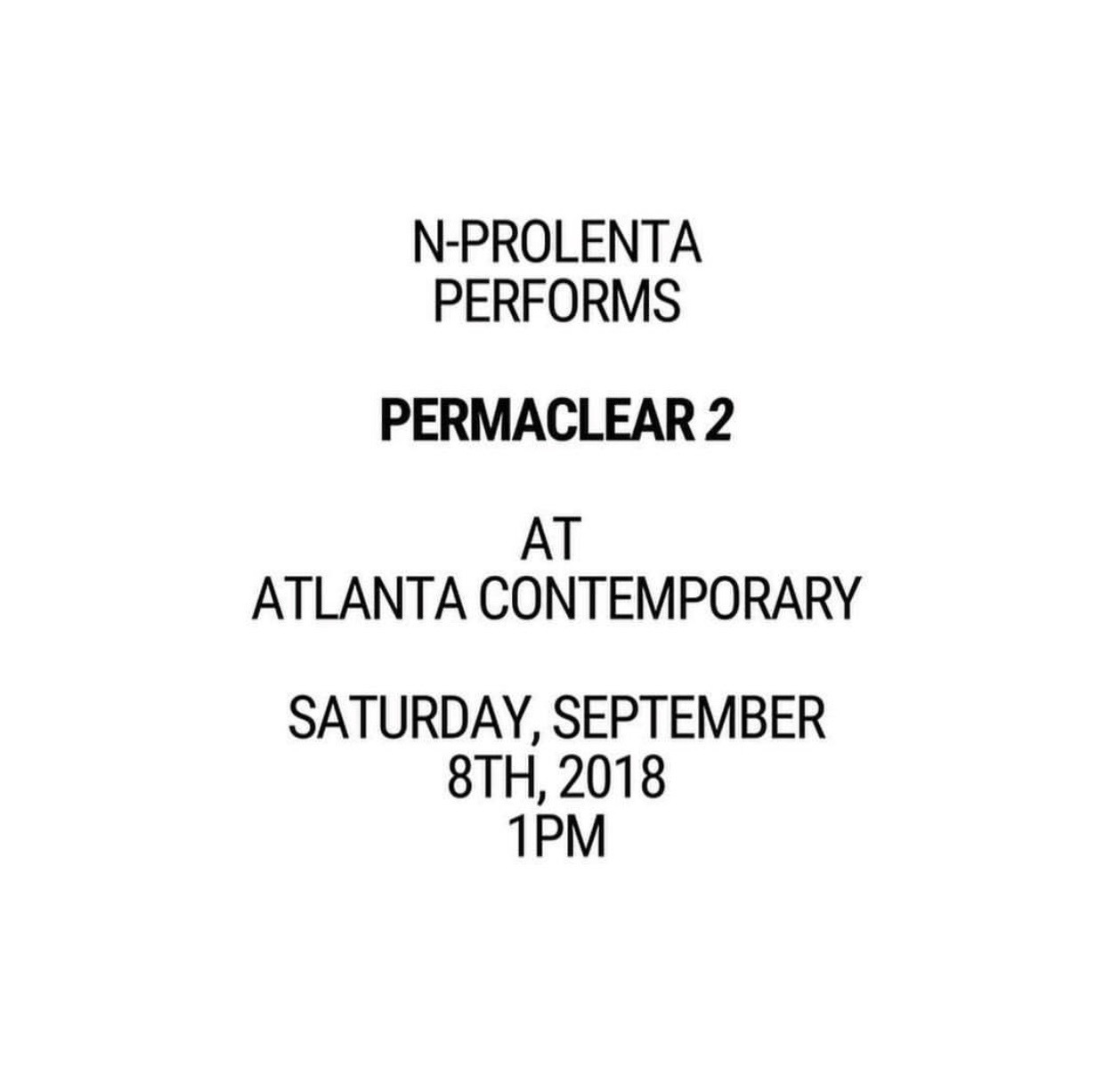 This Saturday, September 8th, the Sunroom is pleased to present PERMACLEAR 2, a performance by Fayetteville, NC-based artist and producer, Brandon Covington Sam-Sumana, who takes the title “N-Prolenta”. The performance will begin promptly at 1pm and will last about 1 hour.

The performance is part of the artist’s exhibition, PERMACLEAR 2, organized by The Sunroom, which is on view at Atlanta Contemporary from August 25 - October 21, 2018. N-Prolenta’s practice weaves together methodologies ranging from sound, video, performance and speculative financial models as means of interrogating the intersection of digital culture, technology, modes of production and Black subjecthood. For PERMACLEAR 2, N-Prolenta draws upon the form of an ultrasound: the space acts as a bowed, womb-like host lined with scans and video monitors, the core of which will be activated by the artist in a performance on September 8th.

In Redactions, a collaged record of email correspondences serving as the central hearth of the show, the artist reveals themself and their collaborators by way of written transactions. The work offers up the pixelated scaffolding of their practice while also twisting, redacting and obscuring it. As with the lining of a womb, these correspondences are the connective tissue that supplies nutrients to the body inside; it is generative and regenerative.

The framework of the ultrasound points to systems of knowledge and perception that eschew the dominant realm of visual information, instead using sonic waves to (1) author other senses and (2) map relationships between different entities. For PERMACLEAR 2, N-Prolenta will activate the exhibition with a performance that explores how sound can adapt in response to various physical and visual stimuli. Rather than using direct speech to describe sensations, they will illustrate the aural manifestations of those non-sonic stimuli; they will seek to illustrate scent through sound, taste through sound, touch through sound, and so on.

N-Prolenta often draws upon paradigms of exposure and erasure in their work to point to the precarity of the Black subject as the crux of increasingly desperate global economic and environmental pressures. Of their most recent video project, No Crypt More Powerful Than Text (Adida One)— an essay that winds together nefarious political acts and instances of ally theater overtop a swirling, cosmic black hole that is flanked by stock images, screenshots, and photographs of the essay’s subjects— N-Prolenta writes: “[Through the industries of art and culture, and its relevant artifacts], the resource-configurations needed for global elite to strengthen the [control] they already possess are made plainly visible, and modifiable… World War III has long begun and these realms compose the front lines of battle. World War III has been quiet, slow-bleeding, and micro-scaled.”

Brandon Covington Sam-Sumana, who takes the title “N-Prolenta,” was born in Fayetteville, NC in the mid-90’s. They are a 2017 recipient of the Rhizome Microgrant Award for their ongoing project Black Hydra’s Discharge Springs Forth Errantly From Her Many Mouths. In 2018 they released a mini-album, Good White People Playing in Scat, Laughing, Loving Every Minute: Double Adida, and in 2017 they presented Banana Island: Hublots, a live-streamed performative installation and mixtape at the New Museum, curated by Aria Dean.

THE SUNROOM was established in Richmond, VA in 2016 as a collaborative project between Ellie Hunter and McKeever Donovan. The platform functions as an exhibition space and small edition publishing entity. McKeever Donovan (Saint Paul, MN) and Ellie Hunter (San Francisco, CA) both received MFA’s in Sculpture + Extended Media from Virginia Commonwealth University and work across sculpture, installation and video. Donovan has participated in residencies at Ox-Bow and Yale Norfolk, and has exhibited at Wolphaerstraat 74B (Rotterdam), Squash (Mexico City), and US Blues (New York). Hunter is currently in residence at Interstate Projects in New York and has exhibited at PEACH (Netherlands), Vox Populi (Philadelphia), and Mascot Studio (San Francisco).

McKeever Donovan was born in 1987 in Saint Paul, Minnesota. He received his BFA from The School of the Art Institute of Chicago in 2011 and has attended residencies at Yale University’s Norfolk School of Art and OxBow School of Art. Donovan’s work deals with confused and illusionistic spaces as a way to investigate the psychological underpinnings of the built environment. Donovan has participated in exhibitions at U.S. Blues, Brooklyn, NY; The Green Gallery, Milwaukee, WI; Squash Editions, Mexico City, MX; Important Projects, Oakland, CA; Kodomo, Rockaway Beach, NY; Lana’s, Queens, NY and Monument 2, Chicago, IL.