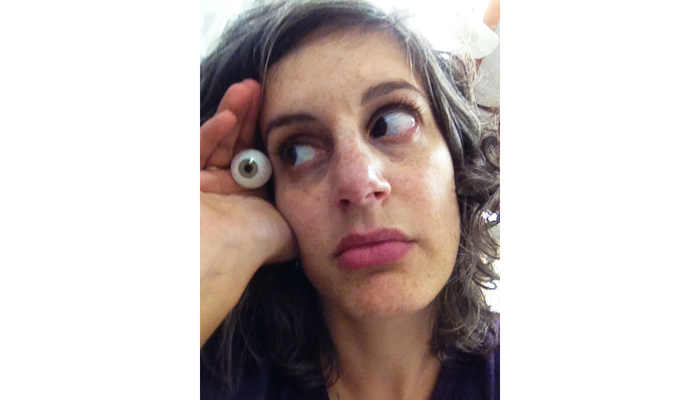 Free and Open to the Public.

Contemporary Talks is a series that connects Atlanta audiences with some of the most consequential thinkers and doers in the world of art and culture. The speakers share thoughts about their past and present projects – what informs and motivates them, what challenges they face, and why it matters.

Jamie Isenstein was born in 1975 in Portland, Oregon, and lives in New York. She earned her BA from Reed College in Portland in 1998 and her MFA from Columbia University in 2004. Isenstein often absorbs the persona of inanimate objects (uncomfortably for hours at a time) sitting—or standing or crouching—at the mercy of her art. Isenstein is known for blurring the lines between performance and sculpture, often through her use of her own body as a ready-made object. Isenstein reflects on the concept of art living beyond its creator and the role of the artist within a work of art, utilizing the vocabulary of comedy and magic to speak to such larger issues. She incorporates her body into objects for long durations often rely on her presence but then offer an equally compelling solution for when she is absent. In doing so, Isenstein’s performances never truly end but instead go into extended intermissions.

Isenstein is currently preparing work for her third solo exhibition at Andrew Kreps Gallery, in New York City for the spring of 2015. Her Contemporary Talks lecture aligns with the exhibition opening for Pratfall Tramps of which Isenstein is a participating artist [February 6-April 11, 2015, curated by Rachel Reese for Atlanta Contemporary Art Center].

Free and Open to the Public. Contemporary Talks is sponsored by Possible Futures.

Jamie Isenstein blurs distinctions between performance and sculpture, often through use of her own body as ready-made object in her “inhabited sculptures,” and thereby questions the notion of “live” in her work. Isenstein reflects on the concept of art living beyond its creator and the role of the artist’s hand, quite literally, within a work of art, most often utilizing the lexicon of comedy and magic as metaphors for larger contexts. As with Magic Lamp (2005), and Isenstein’s other inhabited sculptures, it is almost an absurd reversal where the artwork has co-opted the artist’s body, creating an anthropomorphized self-deprecated sculpture. While these sculptures rely on her body’s presence, Isenstein offers an equally compelling solution for when she is absent. In doing so, Isenstein’s performances never truly end but instead go into extended intermissions. This way, unlike most performance or endurance art that has a finite beginning and end, her performances become more like sculptures that last indefinitely. Isenstein’s art practice offers an uncanny dimension to seemingly inanimate objects: In Snuffer (2008), she heightens the duality of being live and inanimate at the same time. The photo depicts a candle evading its own mortality in a comic way. At times, Isenstein’s comedic narrative becomes so nuanced and personalized that she makes jokes about the forms, props, and manifestations that comedic intent may take. In her Untitled (2013) clown shoe series, for example (the clown shoe is already a joke—an oversized, physical prop worn by a performer) Isenstein extends, re-formulates, and finally curls the joke back onto itself. On view are three iterations from this series, increasing in scale from a one-panel to three-paneled clown shoe, a clown shoe to laugh at clown shoes.